Bilal Sheikh widely known as Emiway Bantai is one of the biggest names in underground Hip-Hop Rap scene. He debuted with a song called ‘Glint Lock’ in the year 2013 and garnered fame with ‘Aur Bantai’ in 2014. At present, he is considered as India’s trending and most popular Rapper. He has over 4 million subscribers on YouTube which is the highest for any Indian rapper. He has appeared in many videos from 2014 but he became a viral sensation on the internet after the rap battle with Raftaar. His back to back diss tracks against Raftaar made him immensely popular among masses. He was also seen in the movie ‘Gully Boy’. This Mumbai rapper has a crazy fan following and he remains independent, labeling himself as an ‘Independent artist’.

Emiway was born on 13th of November 1995 in Mumbai. His concrete name is Bilal Shaikh but he was likely called Shahrukh Shaikh or Emiway Bantai. During his schooling stages too he used to be an wholesome student. He used to be a timid child who did not speak much. At the very beginning Emiway knew none about Rap Music. On a mere day a classmate of Emiway on the last bench was crooning a song named ‘NOT AFRAID’ by Eminem. As the words fell on Emiway’s ears he went to the boy and started inquiring him about the song. Then his friends responded it was a Rap Song. Unfortunately Emiway didn’t knew anything so his friends used to criticize him. But eventually his friends gave him guidance about the rap music and adviced listening them on the television.
On that very day itself , Emiway went back home switched the television ON and heard the song NOT AFRAID by EMINEM. Emiway was incredibly amused by the song and he started listening to that song time and again. He murmured the song daily and also verbatimmed it. After a couple of days he warbled the song to his friends in the school. Hearing to his song all his friends were fascinated and astonished as well. Everyone was stratled about how did he memorize the song..? and questioned him the same. From that moment Eminem gave more interest towards Rap Music. Each day he used to discern the songs of EMINEM and LILLY VEN. Then he completed his school and went for the college years. In his college he was praised by his mates and friends for his Singing. He was then advised by his friends for writing his own songs and releasing them. Following up to their concerns he released his first song named ‘GLINT LOCK’.

Many of the peoples liked his song but he didn’t get as much views as expected at that time. Still he was satisfied that the people who heard his songs gave a positive response. At the genesis he used to make Raps in English but then he was advised by his Father and started making Raps in Hindi. Then he released his next song in the Hindi language, which was named as ‘AUR BANTAI’. This song was liked by a much larger number of people and at present this song has got more than 2 Millionviews on the internet. Keeping this in acknowledgement he aimed to make RAPPING as his Career. 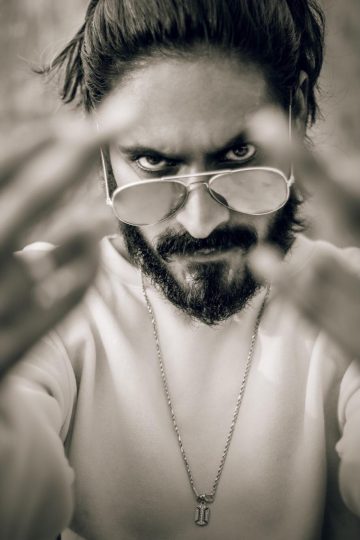 66. Thanks To God Rap Lyrics – Emiway