Dilin Nair is a rapper better known by his stage name Raftaar, stylized RAFTAAR, Group Member of Mafia Mundeer, formed by Yo Yo Honey Singh.

Dilin Nair (born 16 November 1988 in Trivandrum Kerala, India) , better known by his stage name Raftaar, stylized RaftaaЯ. He was formerly a member of the urban music group Mafia Mundeer, formed by Yo Yo Honey Singh. He came into the spotlight when he split from the group and was signed to Three Records by the Punjabi band RDB. He works with Manj Musik and his wife Nindy Kaur after the split of RDB. He has also started singing, rapping, writing lyrics and producing music for Bollywood.

Raftaar was first introduced in the song “We Doin It Big” by RDB. Later, he starred in the album Born Star and contributed four songs, “Majnu”, “Sugar”, “Tere Piche” and “Bottle”. Raftaar released his solo album WTF – Witness The Future in 2013. The line “Ab yeh karke dikhao” from his song “Swag Mera Desi”, which was already used in Yo Yo Honey Singh’s song named “Party With The Bhoothnath”, became a centre of controversy between the two rappers. 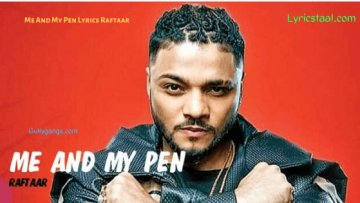 27. Me And My Pen Lyrics Raftaar