and widely considered to be one of the greatest and most influential singers of the Indian subcontinent. Rafi was notable for his voice, versatility and range; his songs were varied from fast peppy numbers to patriotic songs, sad numbers to highly romantic songs, qawwalis to ghazals and bhajans to classical songs. He was known for his ability to mould his voice to the persona and style of an actor, lip-syncing the song on screen in the movie. He received six Filmfare Awards and one National Film Award. In 1967, he was honoured with the Padma Shri award by the Government of India. In 2001, Rafi was honoured with the “Best Singer of the Millennium” title by Hero Honda and Stardust magazine. In 2013, Rafi was voted for the Greatest Voice in Hindi Cinema in the CNN-IBN’s poll.Mohammed Rafi All songs

Rafi moved to Mumbai (then Bombay), Maharashtra in 1944. He and Hameed Sahab rented a ten-by-ten-feet room in the crowded downtown Bhendi Bazar area. Poet Tanvir Naqvi introduced him to film producers including Abdur Rashid Kardar, Mehboob Khan and actor-director Nazeer. Shyam Sunder was in Mumbai and provided the opportunity to Rafi to sing a duet with G. M. Durrani, “Aji dil ho kaabu mein to dildar ki aisi taisi…,” for Gaon Ki Gori, which became Rafi’s first recorded song in a Hindi film. Other songs followed.

List of songs recorded by Mohammed Rafi
This is an alphabetical list of known Hindi songs performed, sung and/or recorded by Mohammed Rafi between 1942 and 1980. Over 5,000 of his songs are listed here. Mohammed Rafi also sang in several other different languages, which might not be included here. The genre of song is first, followed by any other singers and the music director or lyricist, then Album name and Year released. 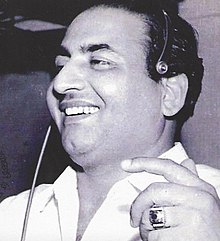