Asha Bhosle born 8 September 1933) is an Indian playback singer and an entrepreneur. She is best known for her playback singing in Hindi cinema, although she has a wider repertoire. Bhosle’s career started in 1943 and has spanned over six decades. She has done playback singing for over a thousand Bollywood movies. In addition, she has recorded several private albums and participated in numerous solo concerts in India and abroad. In 2006, Asha Bhosle stated that she had sung over 12,000 songs a figure repeated by several other sources. In 2011, she was officially acknowledged by the Guinness Book of World Records as the most recorded artist in music history. The Government of India honoured her with the Dadasaheb Phalke Award in 2000 and the Padma Vibhushan in 2008. Bhosle is the sister of playback singer Lata Mangeshkar.

Renowned for her soprano voice range and often credited for her versatility, Bhosle’s work includes film music, pop, ghazals, bhajans, traditional Indian classical music, folk songs, qawwalis, and Rabindra Sangeets. Apart from Hindi, she has sung in over 20 Indian and foreign languages. In 2013, she made her debut as an actress in the film Mai, and received critical acclaim for her performance.

Asha Bhosle was born in the small hamlet of Goar in Sangli, then in the salute princely state of Sangli (now in Maharashtra), into the musical family of Deenanath Mangeshkar, who was Marathi and Konkani and his Gujarati wife, Shevanti. Bhosle’s father was an actor and classical singer on Marathi Musical stage. When she was nine years old, her father died. The family moved from Pune to Kolhapur and then to Mumbai. She and her elder sister Lata Mangeshkar began singing and acting in films to support their family. She sang her first film song ‘”Chala Chala Nav Bala” for the Marathi film Majha Bal (1943). The music for the film was composed by Datta Davjekar. She made her Hindi film debut when she sang the song “Saawan Aaya” for Hansraj Behl’s Chunariya (1948). Her first solo Hindi film song was for the movie Raat Ki Raani (1949).

At the age of 16, she eloped with 31-year-old Ganpatrao Bhosle, marrying him against her family’s wishes.

In the early 1960s, prominent playback singers like Geeta Dutt, Shamshad Begum, and Lata Mangeshkar dominated the singing for the female lead and the big films. Asha used to get the assignments they refused: singing for the bad girls and vamps, or songs in the second-grade movies. In the 1950s, she sang more songs than most playback singers in Bollywood. Most of these were in low budget B- or C-grade films. Her earliest songs were composed by A R Qureshi, Sajjad Hussain, and Ghulam Mohammed, and most of these songs failed to do well. Singing in Sangdil (1952), composed by Sajjad Hussain, she got reasonable recognition. Consequently, film director Bimal Roy gave her a chance to sing in Parineeta (1953). Raj Kapoor signed her to sing “Nanhe Munne Bachche” with Mohammed Rafi in Boot Polish (1954), which gained popularity.

O. P. Nayyar gave Asha a break in CID (1956). She first achieved success in B. R. Chopra’s Naya Daur (1957), composed by him. Her duets with Rafi like “Maang Ke Saath Tumhara”, “Saathi Haath Badhana” and “Uden Jab Jab Zulfein Teri”, penned by Sahir Ludhianvi, earned her recognition. It was the first time she sang all the songs for a film’s leading actress. Chopra approached her for several of his later productions, including Gumrah (1963), Waqt (1965), Hamraaz (1965), Aadmi Aur Insaan (1966) and Dhund (1973). Nayyar’s future collaboration with Bhosle also resulted in success. Gradually, she established her status and received the patronage of such composers as Sachin Dev Burman and Ravi. Bhosle and Nayyar had a professional and personal parting of ways in the 1970s.

In 1966, Bhosle’s performances in the duets from one of music director R.D. Burman’s first soundtracks, for the movie Teesri Manzil, won popular acclaim. Reportedly, when she first heard the dance number “Aaja Aaja”, she felt she would not be able to sing this westernised tune. While Burman offered to change the music, she refused, taking it as a challenge. She completed the song after ten days of rehearsals, and “Aaja Aaja”, along with such other songs as “O Haseena Zulfonwali” and “O Mere Sona Re” (all three duets with Rafi), became successful. Shammi Kapoor, the film’s leading actor, was once quoted as saying– “If I did not have Mohammad Rafi to sing for me, I would have got Asha Bhosle to do the job”. Bhosle’s collaboration with Burman resulted in numerous hits and a marriage. During the 1960-70s, she was the voice of Bollywood’s actress and dancer, Helen, on whom “O Haseena Zulfon Wali” was picturised. It is said that Helen would attend her recording sessions so that she could understand the song better and plan dance steps accordingly. Some of their other popular numbers include “Piya Tu Ab To Aaja” (Caravan) and “Yeh Mera Dil” (Don), among others.

Asha Bhosle has won seven Filmfare Best Female Playback Awards of 18 nominations. She won her first two awards in 1967 and 1968. (Mangeshkar asked not to be considered for the award nominations after 1969 to promote new talent). After receiving the award in 1979, Bhosle emulated her elder sister and requested that her name not be considered for the nominations hereafter. Despite this, Bhosle is the most frequent winner of this award to date, tying with Alka Yagnik. She was later given a Special Award for Rangeela in 1996, and the Filmfare Lifetime Achievement Award in 2001. Following is the list of her Filmfare Awards: 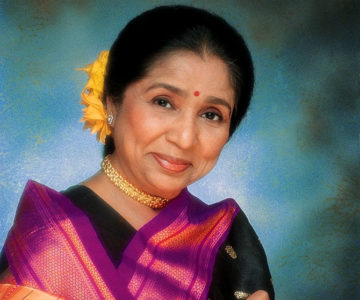