Muhammad Atif Aslam Born 12 March 1983 is a Pakistani playback singer and actor. He has recorded numerous chart-topping songs in both Pakistan and India and is known for his vocal belting technique. He predominantly sings in Urdu, Hindi and has also sung in Bengali. Because of his chart-topping and successful songs, he is often regarded as one of the best playback singers of Indian music industry till date. He has received Tamgha-e-Imtiaz in 2008, the fourth-highest decoration given to civilians in Pakistan and has also received numerous Lux style awards. His acting debut was in the 2011 social drama Bol. In 2019, he was awarded The Dubai Walk of fame-Star for being the ‘Best Singer in Pakistan’.

Atif Aslam is a very popular singer in both countries India and Pakistan. He is also known as Pakistani male playback singer. He is also a songwriter and an actor also. His first movie debut was (Bol). The film was released on 24th of June in the year 2011. Its a Pakistani language movie.

Atif Aslam was born on 12th of March 1983 in a Panjabi Muslim family. His hometown was Wzirabad, Panjab, Pakistan. He releases his first song on the 17th of July in the year 2004. The title of his song was Jal Pari and its get hit instantly. After this Atif Aslam was sung in many songs. He got his first song in Bollywood in the year 2005. The film was Zeher, directed by Mahesh Bhatt. The song was Wo Lamhey and it was gonna very super hit. You may also like to read Hrithik Roshan Biography.

Atif Aslam mainly works for Hindi Movies. Atif Aslam Net Worth is $22 Million. He gets 9-10 Lakhs for a single song. He Awarded by Govt of Pakistan. He received many awards and nomination for his singing performance.

Atif Aslam married to Sara Bharwana since 28 March 2013. His wife is an educationist. They got a son name Ahad. Ahad was born in 2014. He is Muslim by Religion, Sun Sign Pisces and Nationality Pakistani.

Atif Aslam says he has had no formal training in music, that it was not until his college days that he began to actively take part in music competitions and his friends inspired him to pursue a career in music. He has said that Nusrat Fateh Ali Khan is one of his very first inspirations in singing.

The career of Atif Aslam begun with forming the band Jal and releasing the song ‘Adaat’ with Goher Mumtaz in Pakistan in 2003. The original version of the song was written by Goher Mumtaz and sung by Atif Aslam . During that time, Atif Aslam was the lead singer of Jal. He recorded Aadat with his pocket money at the age of 17. The band released the song on the internet in 2003, which became a youth anthem. 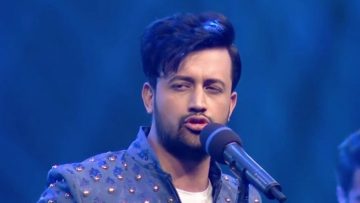