Find All Songs Lyrics from the Movie Kedarnath – 2018, Read and sing along to all your favorite

Kedarnath is a 2018 Indian Hindi-language romantic drama disaster film written, directed and co-produced by Abhishek Kapoor. Featuring late actor Sushant Singh Rajput and newcomer Sara Ali Khan in lead roles, it tells an inter-faith love story between a wealthy Hindu Brahmin girl whose family owns a lodge and shops near the historic Kedarnath Temple in the Uttarakhand mountains and a humble Muslim boy who is a ‘pithoo’ (porter) working in the same vicinity. As their relationship grows closer, the pair face many obstacles, including familial disapproval and contrasting backgrounds; when the sudden rains of the 2013 Uttarakhand floods devastate the region, the couple are forced to survive against the elements and face the ultimate test of their love.

The film is produced by Ronnie Screwvala of RSVP Moviess of Guy in the Sky Pictures, along with Pragya Kapoor and Abhishek Nayyar; it was co-written with Kapoor by Kanika Dhillon. The film’s production began in June 2017, and principal photography commenced on 5 September 2017. The film released on 7 December 2018 to mixed reviews, but with praise for Khan’s debut performance. 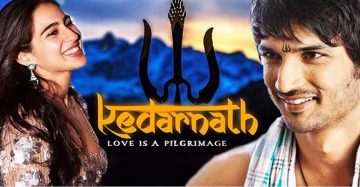