Vishal Mishra is a Mumbai-based Indian music composer and singer in the film and music industry in India. He first appeared in a television reality singing show aired on DD National. He was then guided through his initial days in the industry by Lalit Pandit of Jatin-Lalit, and then rapidly worked his way up in the industry, bagging a number of projects as a music composer in the Hindi and Marathi film industry.

His debut film as a director called Coffee With D which stars Sunil Grover, Zakir Hussain (actor), Pankaj Tripathi, Dipannita Sharma and Anjana Sukhani. The film has been shot in Mumbai and Goa. The film also stars Rajesh Sharma (actor) in a cameo role. The film released on Jan 20, 2017.

His third film, called Hotel Milan stars Kunaal Roy Kapur, Karishma Sharma, Zakir Hussain (actor), Jaideep Ahlawat and Rajesh Sharma (actor). The story revolves around the anti-Romeo squad. The film’s shoot started in Kanpur on July 18, 2017. It has been shot on locations like Ganga barrage, Birhana Road, Motijheel, Phool Bagh and Swaroop Nagar. Some sequences of the film will be shot in Chitrakoot and Khajuraho too.

He has also commenced working on a women-centric thriller starring Urvashi Rautela in the leading role.

He is also working on a directorial venture, Heeriye, starring Himesh Reshammiya and Tigmanshu Dhulia.

Prior to this, Vishal has also directed 3 short films. One of these films went out to win an award at the Rio Film Festival. 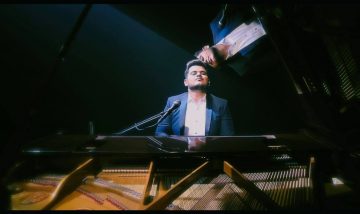