K K Singer – Krishnakumar Kunnath is an Indian singer. He is a prominent singer in Hindi, Tamil, Telugu, Kannada, Malayalam, Marathi, Bengali and Gujarati languages films. K K is noted for his clear and soothing voice; broad vocal range and noteplay. He is considered as one of the most versatile singers of India.

KK worked briefly as a marketing executive in the hotel industry. Later in 1994 he moved to Mumbai in order to pursue a career in singing. He gave his demo tape to Louis Banks, Ranjit Barot and Leslie Lewis, and voila! he got his first opportunity from UTV to sing jingles. This talented man has sung more than 3500 jingles in 11 languages. He considers Leslie Lewis his mentor for giving him his first break to sing jingles. A.R Rahman’s hit song “College Styley” and “Hello Dr.” from Tamil movie, Kadhal Desam (1996) marked KK’s first songs as a playback singer. He stepped into Bollywood with “Tadap Tadap Ke Is Dil” from Hum Dil Chuke Sanam(1999). However, he did sing a small portion of the song “Chod Aye Hum” from movie Maachis(1996). In 1999, he released his first album Pal which got him the prestigious screen award for best singer. He has also lent his voice to many title songs for television including JustMohabbat, Shaka Laka Boom Boom, Just Dance, Kuch Jhuki Si Palkein and Kavyanjali. Apart from singing, he also served as a jury member in the talent hunt show Fame Gurukul.

Kavyanjali Wo Miley The Sung By K K 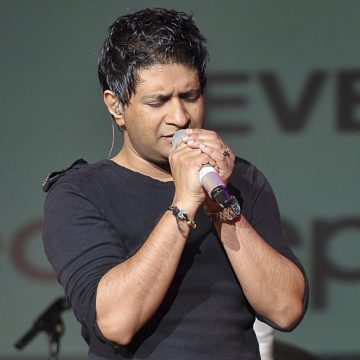 22. Its the time to disco Lyrics

68. Party On My Mind Lyrics