In July 2009, Khan released his debut album, Unforgettable. It includes the singles “Amplifier”, Bewafa and a remix of his first single, Ni Nachleh. It was nominated for Best Album in the 2010 UK Asian Music Awards but did not win. In 2011, Khan departed from Prestige Records to start his own label, later known as IK Records.

Khan released the single Satisfya on 9 May 2013. Unlike his previous singles, it was released by IK Records. The single was produced by his “Amplifier” music producer Eren E. The music video shows Khan driving a yellow Lamborghini Aventador and sitting with a cheetah. Khan’s “Satisfya” video was directed by David Zennie and as of January 2020 , has a 300 million+ views on YouTube.

Khan made his Bollywood debut as a singer for the Hindi film Tevar, which was released on 9 January 2015. As of 2016 the song has over more than 2 million hits.

Khan released a single titled Imaginary on 8 June 2015, produced by Eren E. The single was released on his own record label, IK Records. Khan shot the video with David Zennie in downtown Los Angeles. Imaginary’s official music video received 6 million views within a month of its release and currently 56 million+ views on YouTube. Khan went on and yet came out with another song called “Hattrick” which has 2 million views in a month and currently 15 million+ views.

On Khan’s own birthday, he released his own merchandise called “IKSEASON”

On the 28 September 2018, Khan released his new single “Knightridah”. 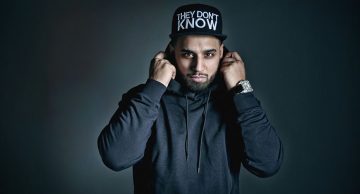