The film was influential in the history of Indian cinema. It was the first masala film, combining elements of the action, drama, romance, musical, crime and thriller genres. The masala went on to become the most popular genre of Indian cinema, and Yaadon Ki Baaraat has thus been identified as “the first” quintessentially “Bollywood film.” It also launched the careers of several actors, as the commercial breakthrough Hindi film for Zeenat Aman and Neetu Singh, who became leading actresses of the 1970s, and as the debut film for Nasir Hussain’s nephews Tariq Khan and Aamir Khan, the latter a child actor who grew up to be one of the biggest movie stars as an adult.

It is still remembered fondly for its Hindi soundtrack, composed by music director R.D. Burman. The track “Chura Liya Hai”, sung by Asha Bhosle and Mohammad Rafi, is particularly well-known. The film was later remade in Tamil as Naalai Namadhe, in Telugu as Annadammula Anubandham, and in Malayalam as Himam. 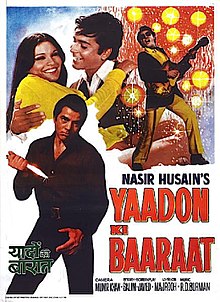