Thalaivi is an upcoming Indian biographical film about the life of J. Jayalalithaa, politician and film actress who served six times as the Chief Minister of Tamil Nadu, with Kangana Ranaut playing the role of Jayalalithaa. Simultaneously shot in Hindi, Tamil and Telugu languages, it is directed by A. L. Vijay and produced by Vibri Media in collaboration with Karma Media And Entertainment.

The film was launched officially on Jayalalithaa’s birth anniversary, 24 February 2019. Initially the film was titled Thalaivi in Tamil and Jaya in Hindi and Telugu languages, but the makers later planned to release it under the title Thalaivi in all three languages. Principal shooting began on 10 November 2019 and completed on December 2020. The film is scheduled for a theatrical release on 23 April 2021.

Thalaivi Songs Lyrics & Videos: Thalaivi is a 2021 Bollywood Hindi movie directed by A. L. Vijay and produced by Vishnu Vardhan Induri, Shailesh R Singh and Brinda Prasad under the banners T-Series. The film, starring Kangana Ranaut and Arvind Swamy was released in theatres on 23 April 2021. Thalaivi songs are composed by G V Prakash Kumar, while Irshad Kamil wrote its lyrics. Check out Thalaivi songs list with lyrics and music videos below. 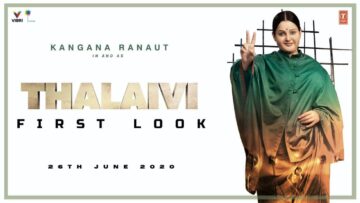