The film is scheduled to release theatrically on 13 November 2020, coinciding with Diwali.

Manoj Bajpayee, Diljit Dosanjh and Fatima Sana Shaikh are set to unite on screen as their upcoming film Suraj Pe Mangal Bhari is among the big Diwali releases this year. The first poster of the film is out and displays the confirmed release date, November 13.

The poster bears the name of the film written on the layout of a traditional Indian horoscope. A microscope is also seen in the picture to point out the film’s connection with the fascination of the Indians with astrology. Directed by Abhishek Sharma, Suraj Pe Mangal Bhari promises some genuine laughs. 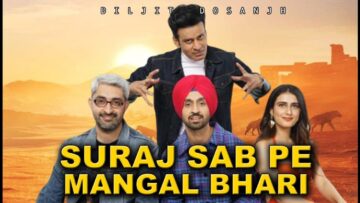