Paani Foundation is a non-profit, non-governmental organization which is active in the area of drought prevention and watershed management in the state of Maharashtra, India. The organization was founded by Indian actor Aamir Khan and his wife, Kiran Rao. The CEO of the Foundation is Satyajit Bhatkal.

The state of Maharashtra in India has a history of recurring droughts and acute water shortage throughout the last several decades (e.g. in 2013). There are both natural and man-made reasons for this situation. One-third of the state falls under the semi-arid climatic zone. Rainfall patterns have been increasingly erratic in recent years due to effects of climate change. Irrigation in the state is 16% of area under cultivation, much lower than the 42% national average. This has led to overuse of bore wells (tube wells), leading to a steep fall in groundwater levels. Water-intensive cash crops such as sugarcane are also cultivated in semi-arid regions, exacerbating the problem.

In 2015, the state government officially declared that 60% of its villages were facing a “drought-like condition”. This means that they reported a crop yield which was less than 50% of the standard yield in the area. In absolute figures, 23,811 of the state’s 39,453 villages come in this category. This will result in a drastic fall in the state’s agricultural output for the year, officials said.

Aamir Khan’s TV series Satyamev Jayate, which discussed wide-ranging social issues plaguing India, had originally addressed the issue of water scarcity and the shortcomings of water management in India in the 12th episode of the first season, which was broadcast on 22 July 2012. After the series ended its run in November 2014, Khan and the show’s director Satyajit Bhatkal decided to take up a cause that they could stay with for several years and show tangible results. They settled upon the tackling the problem of chronic water shortage in rural Maharashtra. Khan and Bhatkal, along with Khan’s wife Kiran Rao and others from the TV series core team spent more than a year understanding the issue and researching possible solutions. In 2016, they set up Paani Foundation.

In April-May 2016, India watched in horror as poignant images of drought emerged from its richest state, Maharashtra. A train commissioned by the railways had to be arranged to supply water to Latur city. Yet, in the same year, there was a citizens’ response to drought when the Paani Foundation was formed with a mission to make Maharashtra ‘drought-free’. 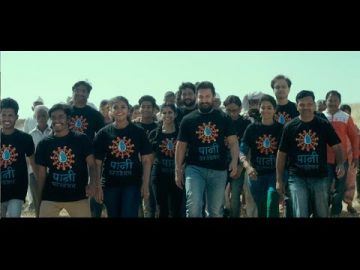