Prem Granth (transl. Scripture of love) is an Indian Hindi-language film which was released in India on 22 May 1996. Directed by Rajiv Kapoor, the movie stars Rishi Kapoor and Madhuri Dixit and deals with the subject of rape. The movie was a commercial failure.

Somen (Rishi Kapoor), a lawyer and son of head priest Swami Dharam Bhushan Maharaj (Anupam Kher), is a man with a very strong character and courage of conviction. He believes in the principles of equality and freedom and often confronts his father on issues of social justice and religion. He especially disapproves of Kedar Nath (Prem Chopra), who uses his father’s clout to exploit the treasury in the temple. His uncle Nandlal (Shammi Kapoor) owns a prosperous dairy farm and keeps himself away from the affairs of religion and social obligations, citing them as unjust and outdated.

Somen meets a beautiful young woman Kajri (Madhuri Dixit) at the annual festival and is drawn towards her at first sight — her lower social caste notwithstanding — and that becomes the dawn of their love. They part unexpectedly, leaving the fire of love burning in Somen. He tries his best to find Kajri, but in vain. Kajri and her father Baliram are on their way back to their village Bansipura, where en route Kajri is kidnapped and forcefully raped by a drunken mysterious man. Kajri becomes pregnant with the man’s child. Kajri’s mother’s sister wants to marry her to a shoemaker, but then Kajri leaves the village in secret and gives birth to the baby of the man who raped her. She begged people for food to eat so that her breasts would become full of milk and her child could survive. The baby then dies and Kajri meets Swami Dharam Bhushan to cremate the child, but he refuses. Kajri buries the baby. 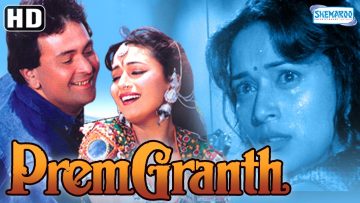