Khuda Gawah is a 1992 Indian Hindi drama film, written and directed by Mukul S. Anand. The film stars Amitabh Bachchan and Sridevi. Nagarjuna, Shilpa Shirodkar, and Danny Denzongpa are featured in supporting roles. The original score was composed by Laxmikant–Pyarelal. The film marked Sridevi and Bachchan’s third collaboration. In the film, Badshah Khan travels from Afghanistan to India to find the killer of Benazir’s father so that he can impress her. He succeeds but soon finds himself framed for a murder and trapped in an Indian prison.

Khuda Gawah was released theatrically on May 7, 1992. The film was praised for its direction, screenplay, performances, music, and production. It was a major commercial success, grossing ₹17.05 crore worldwide, becoming the second highest grossing Indian film of 1992. It entered Limca Book of Records as the first Indian film to use surround sound technique. The film was dubbed in Telugu and was later adapted into a Pakistani television series, by the same name. It is one of the most watched Indian films in Afghanistan’s history.

The film received nine nominations at the 38th Filmfare Awards, including Best Film and won three: Best Director, Best Supporting Actor and Best Sound. Both Sridevi and Bachchan were honored by the Afghan government. 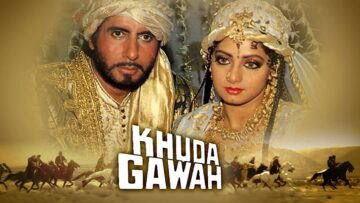