The film was announced on 26 December 2018 as Jhanvi shared the first look. Principal photography commenced on and was wrapped up in October; it was extensively filmed across Lucknow. Netflix acquired the distribution rights and will stream the film worldwide. It will stream on 12 August 2020 on Netflix.

The much-awaited trailer of Gunjan Saxena: The Kargil Girl is here and it is inspiring in every sense. Janhvi Kapoor stars as the titular Flight Lieutenant Gunjan Saxena, who, along with Flight Lieutenant Srividya Rajan, were India’s first women combat aviators to operate in the Kargil war zone on tiny IAF Cheetah helicopters. The trailer perfectly encapsulates the journey of Gunjan Saxena, who stood up against all odds and emerged victorious with her unparalleled courage and sheer determination. The trailer showcases the story of all the obstacles that she had to face through the course of her journey – be it going against the will of her brother (played by Angad Bedi) serving in the army or facing discrimination from her peers, to the challenges of the battle field. The trailer also has glimpses of Pankaj Tripathi, who stars as Gunjan Saxena’s supportive father, and Vineet Singh, an officer, who unknowingly brings out the best in Gunjan Saxena by challenging her on many levels. The film also stars Ayesha Raza and Manav Vij.

Gunjan Saxena: The Kargil Girl, which will release on Netflix on August 12, has been directed by Sharan Sharma, who has also co-written the script with Nikhil Mehrotra. The film has been produced by Karan Johar’s Dharma Productions. The makers of the film, described Gunjan Saxena: The Kargil Girl as “an inspiring true story of a simple girl with big dreams who stood her ground to rule the skies. 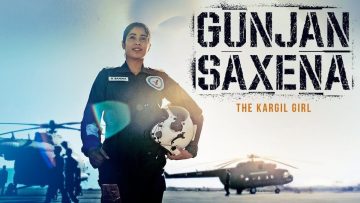