Damini – Lightning is a 1993 Indian Hindi-language crime drama film directed by Rajkumar Santoshi starring Meenakshi Seshadri in the title role alongside Sunny Deol, Rishi Kapoor, Amrish Puri, Tinu Anand, Paresh Rawal in pivotal roles and Aamir Khan in a special appearance. The story is of how a woman fights against society for justice. The film is considered to be one of the best woman-centric films ever made in Bollywood.

Besides being critically acclaimed, the film became the sixth highest grossing of the year and was declared a “hit” at Box Office India. Damini – Lightning is mostly remembered for Meenakshi Seshadri’s career best performance that was highly acclaimed.

It is considered a cult feminist film and is still regarded as an all-time classic female oriented film and important for portraying women empowerment in cinema The pathbreaking film was praised for breaking social taboos and handling the subject of rape with sensitivity; a rarity in Bollywood at the time.

It is equally memorable for Sunny Deol’s brilliant portrayal of an alcoholic lawyer and the role gained him a Filmfare as well as National Film Award for Best Supporting Actor for 1993. It strengthened his Bollywood he-man image. His dialogues in the film “Tarikh pe tarikh” (date after date) and “Dhai Kilo ka Haath” became iconic and a pop-culture reference. The film was a milestone in the careers of Sunny Deol, Meenakshi Sheshadri and Amrish Puri, who gave some great hits like Ghayal and Ghatak: Lethal together. Aamir Khan acted in a special appearance in the stage show dance song. He also promotes his upcoming movie Andaz Apna Apna which was also directed by Rajkumar Santoshi.

Damini – Lightning was remade into Oriya as Nari Nuhne Tu Narayani, starring Sidhanta Mohapatra and Rachana Banarjee. It was remade into Tamil as Priyanka, starring Revathi as the title character. Box Office India declared the film a super hit. This film was remade in Bangladesh as Sottyer Bijoy, starring Manna and Moushumi, directed by F.I. Manik. The rights of the movie are now owned by Shah Rukh Khan’s Red Chillies Entertainment. 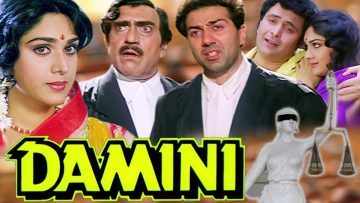