Avtaar is a 1983 Hindi film starring Rajesh Khanna and Shabana Azmi.
It was directed by Mohan Kumar, and the music was by Laxmikant Pyarelal.
Avtaar was a commercial hit, and was critically acclaimed. The film earned several Filmfare award nominations.
Rajesh Khanna achieved success with Amardeep and Prem Bandhan onwards, but this was Rajesh Khanna’s biggest film in terms of box office collections since 1973. However, Rajesh Khanna lost the Best Actor award to Naseeruddin Shah for Masoom. In 1986, Mohan Kumar made Amrit with Rajesh Khanna in the lead as an old man, but with a different story line. 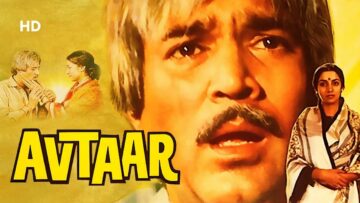