Angrezi Medium is an upcoming Indian Hindi film directed by Homi Adajania and produced under the production banner Maddock Films. The film is the spin-off to the 2017 comedy Hindi Medium and stars Irrfan Khan, Kareena Kapoor Khan, Deepak Dobriyal, and Radhika Madan.

In June 2017 in an interview after the success of his film Hindi Medium producer Dinesh Vijan told Mid Day, “There is definitely scope for a sequel. We would certainly explore it.” Vijan added, “It’s too early. Also, I still have to talk to director Saket Chaudhary, who is currently working on another movie project.” On 24 January 2018, Vijan confirmed the sequel to Times Now. He said, “We have just finished typing the second part”, with “Just finishing touches are being put”, however, “I think you will have to wait for an official announcement for that.” On 30 March 2019 it was reported that Kareena Kapoor has been added to the cast of the film and filming will start from April. The sequel was titled as Angrezi Medium and filming began on 5 April 2019 in Udaipur. On 6 April 2019 Taran Adarsh, the trade analyst introduced the characters of the film as, Deepak Dobriyal plays Khan’s brother and Manu Rishi their cousin, all are running mithai shops and are rivals in business. Pankaj Tripathi joined the cast as travel agent Tony. Jaipur actor Poorvi Jain will play Irrfan’s wife Rashi. . In mid July, director of the film Homi Adajania announced the completion of filming on his Twitter account. 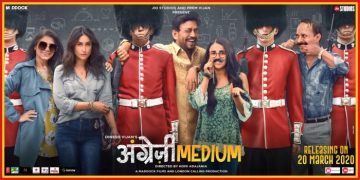