Zulfiqar Jabbar Khan Born 28 October 1980, commonly known as Xulfi is a Pakistani singer-songwriter and music producer. Starting his career in 1994, Khan is the recipient of multiple awards in Pakistan. He is currently working on a television series Nescafé Basement, for which he is the producer and mentor. He has already produced four seasons of the Basement. The fifth season started on February 2019 and received an overwhelming response across the social media.

The YouTube channel of Nescafé Basement became one of the top growing Pakistani YouTube channels and from just 500 subscribers, it completed 100K subscribers in just 9 days after the release of Fifth season’s first episode. Channel have crossed the milestone of 50 million views.

Xulfi was the composer, music producer, guitarist for Entity Paradigm (EP). Entity Paradigm was formed by Xulfi between 1996 and 1999 but was officially announced as a band only in 2000.

He is currently the music producer, songwriter, and lead guitarist for the band Call. After the vocalist’s exit from the band, he continued with other projects at his studio Xth Harmonic. The band made a comeback after 3 years to produce and perform new songs for the fans. He has always been a music fanatic and tries to come up with new ideas. He blames the lack of proper recognition of music as a separate ‘industry’, as the reason for its limited success. Additionally, he states that people in general are not exposed to arts and culture and cultural propagation must be encouraged to make a pervasive and progressive culture and spark the positive interest of the nation in the field.

Khan has also been involved in a number of Bollywood projects as composer, lyricist and producer. Some of his works include Laaree Chooti from Ek Chalis Ki Last Local in 2007, Yeh Pal from Aasma in 2009, Dhadke Jiya from Aalo Chaat in 2009, and Kuch Aisa, Kuch Aisa (Sad Version) and Reh Jaane Do from Aao Wish Karein in 2009.

Xulfi is the Creative Director and Co-founder of Sync, a tech/driven experience curation company. Recently they have worked on the visual curation of Nescafé Basement’s Resistance, Coca-Cola Hum Aik Hain Anthem and Fawad Khan’s Uth Jaag[20] for PEPSI Battle of the Bands. Xulfi has also co-founded Giraffe Pakistan, a content creation company and creative hub with Muhammad Ibrahim and Sync is the subdivision of it. He acts as the Chief Creative Officer (CCO).

Xulfi has worked with various popular brands including Nescafé Basement, Pepsi Battle of the Bands, McDonald’s, Coke, Peshawar Zalmi and more. He produced “Hum Aik Hain” the official anthem by Coca-Cola Pakistan for 2019 Cricket World Cup.This anthem featured 40 musical instruments, most of which were indigenous instruments.

Xulfi also assembled 40 drummers to create a new national song Pakistan Zindabad, which was also featured in Gulf News. This song was created to revive the spirit of nationalism. 40 drummers gathered at Bradlaugh Hall for this song.

Zulfiqar joined hands with WWF Pakistan to create awareness about planting trees and released a video song Rung Do . Khan termed it as more than just a song in an interview with Dawn News.

For Pepsi Battle of the Bands season 2, Khan came for a reunion with Entity Paradigm and performed Hamesha with Fawad Khan, Ahmad Ali Butt, and the entire original lineup. 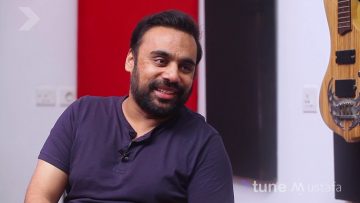