He Is A Indian Singer. Here All Popular Song Lyrics And Short Bio:

He was born in very poor family from Gachchipura, a small village in Nagaur, Rajasthan. He has traditional singing in his blood as his family doing puppet show. And so following his family sawai also started doing puppet shows where he sung for puppets and make puppet dance with his finger skills. But he says that his business of puppet show was almost closed due to this modern era where everyone loves mobiles and technology. As he comes from poor family he never get trained for singing. There are no proper details available of his study.

Sawai was born and grew up in Nagaur, Gachhipura, Rajasthan. Sawai and family were involved in puppet show but in recent time they couln’t earn enough money for their basic needs. But in this tough condition Sawai did not gave up and took the chance in mobile audition for Indian singing reality show “Indian Idol 12”. where he was selected for audition round. He gave his audition in front of popular singers such as Himesh Reshmiya, Vishal Dadlani and Neha Kakkar. He amazed all with his traditional singing by the song “Keshariya Balam Aao Mere Desh”. After listening this song Himesh told that he never thought after Sunny Hindustani and Salman Ali a person of same level can come but Himesh told that Sawai is answer of his questions. With his magic towards traditional singing he cleared the audition round and golden mic and makes his place in the show as contestant. In show he is doing good and has a large fan following. Indian idol 11 contestant Nitin Kumar and Ankush Bhardwaj said that they are fan of Sawai’s singing. 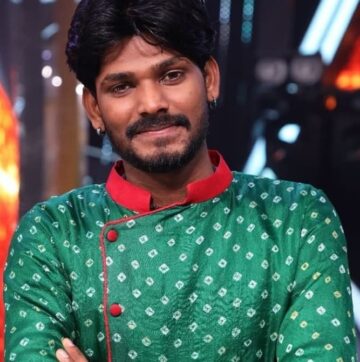