Rohanpreet Singh is a Punjabi singer who was last seen in Mujhse Shaadi Karogi. He is rumoured to be dating Neha Kakkar. Check out Rohanpreet Singh’s biography.

Rohanpreet Singh was born on 1 December 1994 in Patiala. He is a singer by profession. He did his schooling from Shri Guru Harkrishan Public School situated in Patiala. He made his debut in 2007 with the show named, Sa Re Ga Ma Pa L’il Champs. He decided to pursue a career in singing at the age of 3 only. He also started training at the age of 3. He received his training under the guidance of professor Gurmukh Singh Sehgal. He received his training in the genre of Hindustani Classical Music.

Rohanpreet Singh is also a singer and has made a singing debut with the 2017 song Bang Gang. He is a contestant of the show TV Rising Star 2 which aired on Colors. The show was won by Hemant Brijwasi. The singer took off on his singing journey with encouragement from his father. He started his journey with Saregama Lil Champs in the year 2007, where he became the First Runner Up.

He not only participated in the show, Sa Re Ga Ma Pa L’il Champs but also emerged as its 1st runner up. Besides this, he has also performed in numerous concerts in various countries like Malaysia, Thailand, London, and India. He also participated in the show aired on channel colors named, Rising Star in 2018. He emerged as the 1st runner up and lost the winning title to Hemant Brijwasi. After the completion of the show, he released numerous music albums. He released his song titled, Taqleef in 2018. In the same year, he released another song titled, Pehli Mulakat. His other two songs which were released in 2019 were titled as Ainkan Kaliyan and Hello Hi.

According to celebcenter.net, Rohan who belongs to a Sikh Family was born and brought up in Patiala. His father Gurinder Pal Singh was a sportsman in Punjab State Electricity Board while his mother is a housewife. He was born on December 1st, 1994, and is a Sagittarius.

He did his schooling from Shri Guru Harkrishan Public School in Patiala and trained for Hindustani classical music under Professor Gurmukh Singh Sehgal. The singer also has 2 sisters Rashminder Kaur and Amanpreet Kaur.

Rohanpreet has done songs including Taqleef, Pehli Mulaqat, Ainkan Kaliyan, and Hello Hi since his debut. He was also seen in the Colors show Mujhse Shaadi Karogi. He was seen competing with several other male contestants to impress Shehnaaz Gill. The singer enjoyed a massive following on Tik-Tok. His hobbies include dancing and singing. His favourite actors are Sunny Deol and his favourite film is Apne. Rohan has a crown tattooed on the inside of his right wrist; he owns a Royal Enfield bike. Prawns and Kaju Barfi are two of his most liked dishes.

Singer Neha Kakkar is rumoured to be dating Rohanpreet Singh. Singh has posted a couple of pictures with Neha and the two definitely look adorable together. Read on to know more details about Rohanpreet Singh. 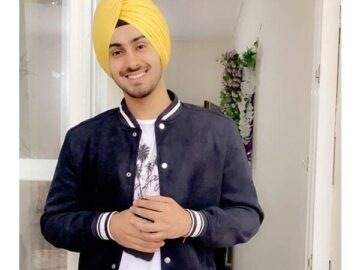