Parmaish Verm was born on 03-07-1986 in Patiala in the state of Punjab, India. He is an Indian Music Director, Film Actor, Film Director, Artist, Singer & Model.

He started his career as a singer, and later debuted as an actor with the Movie Rocky Mental.
Parmish started his career as a director with zimmewari bhukh te doori which was the story of an adolescent boy based on the life of Verma where he described the hard time which he faced while living in Australia and about the advice given to him by Gurikk Maan.

Verma debuted as an actor from the movie Rocky Mental in 2017. He also acted in the lead role in movies like Dil Diyan Gallan (2019), Singham and most recently, Jinde Meriye.

Parmish Verma attended Yadavindra School in Patiala. For higher studies, he went to Australia and enrolled for Hotel Management Course but dropped out and returned back to India and decided to build a career in acting.

Prior to making his debut in films, he did theatre for almost 10 years. He finally made his acting debut through the Punjabi film “Punjab Bolda” in the year 2011. Soon, he launched his production house named “Parmish Verma Films” through which he directed music videos of famous Punjabi singers. Some of the famous music videos which he directed are Aadat Gal Jattan Wali and Thokda Reha by Ninja and Mankirt Aulakh’s music video of the song titled Gallan Mithiyan. After directing a series of hit music videos, he directed a Punjabi movie titled Thokda Reha in the year 2015.

He was recently seen in Vikram Thori’s film titled Rocky Mental. The film has garnered positive reviews and after proving his mettle as a director, he is sure to win audiences hearts through his actions as well. He has proved his mettle as an actor, director, and producer. Hardly people know about his hidden talent that he is a poet as well. To show what he has got, he made his singing debut with the song “Le Chak Me Aa Gaya”. The song became a sensation immediately after its release and thus far has garnered over 55 million views on YouTube. His latest song Gaal Ni Kadni has been highly appreciated and is arguably the biggest hit song of his career with nearly 70 million views. His recent released film Dil Diyaa Galaan. The film was a huge hit and has established him as an accomplished actor as well. He is widely followed and has become a trendsetter as many people in Punjab have started keeping beard and hairstyle of his. His latest single Police too have been well received like his other singles. His journey from working in a pub to becoming a heartthrob in Punjab has been highly inspiring.

Parmish Verma is a popular Punjabi singer and actor, who debuted on the big screen with the Punjabi movie Punjab Bolda. After completing his schooling, Parmish went to Sydney to pursue a Diploma in Hotel Management. But, he left the course half way and came back to India to pursue an acting career. After returning to India, Parmish did theatre for 10 years.

In April 2018, Parmish was shot in the leg by unidentified assailants night near his home in Mohali. He was immediately rushed to the nearby hospital. 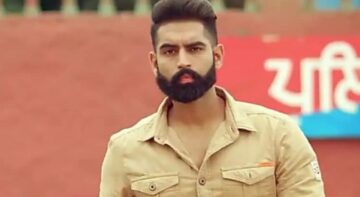