She did her schooling from Batala’s D.A.V. School and went to HMV College, Jalandhar to pursue her graduation in Biotechnology. Nimrat was inclined towards acting since her childhood but later, developed interest in singing. She learned classical music from Sushil Narang. Khaira participated in the singing reality show “Awaaz Punjab Di” when she was in her 12th standard but got eliminated from the show after being selected in the top 20 contestants. In 2012, she won season 3 of the show “Voice Of Punjab.”

Thereafter, she did her post graduation in Vocal Music from Guru Nanak Dev University, Amritsar.

Nimrat Khaira belongs to a Jatt Sikh Family. Her father is a Government employee in the Forest Department and her mother was a Government teacher. She is the only child of her parents.

Nimrat started her singing career in 2015 with the duet song “Rabb Karke” along with Nishwan Bhullar. Next, she released her single track “Ishq Kacheri” and earned wide popularity. Subsequently, Nimrat released various Punjabi songs which were instant hits like “SP De Rank Wargi,” “Salute Wajde,” “Taanvi Changa Lagda,” “Rohab Rakhdi.” She has done playback singing for various films including “Dubai Wale Sheikh” in the film ‘Manje Bistre,’ “Akhar” in the film ‘Lahoriye.’ Some of her popular songs include “Suit,” “Designer,” “Brobar Boli,” “Ranihaar,” and “Tohar.”

In 2017, she made her acting debut by playing the role of ‘Harleen Kaur’ in the Punjabi film “Lahoriye.” In 2018, she appeared in the lead role in the film “Afsar” opposite Tarsem Jassar.

In addition to acting and singing, Nimrat has also featured on the cover of various magazines including “Lifestyle Magazine.”

Her hobbies include reading, poetry, singing, gymming, doing yoga, & travelling.
She follows a vegetarian diet.
She was a bright student in her school days.
Nimrat started learning classical music when she was in her 3rd standard.
In 2011, she participated in the season 2 of Voice of Punjab, but she got eliminated from the show just a day before the grand finale.
According to Nimrat, if she wouldn’t have been a singer, she would have been an IAS Officer. 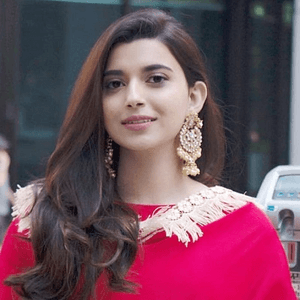