Jitendra Joshi is an Indian actor and reality show host who predominantly works in Marathi cinema.[1] He starred as constable Katekar in the hit Netflix television series Sacred Games.

Joshi also wrote the popular song Kombdi Palali, which was later remixed as Chikni Chameli. He got his first recognition from the Zee Marathi daily soap Hassa Chakatafu where he played Krishna. In 2011, he hosted Marathi Paaul Padte Pudhe, a talent reality show on the Zee Marathi. In Marathi he played title role of Sant Tukaram in Tukaram (film released in 2012) and a comic role in Guldasta. Not only as a hero, but he has also appeared as Sai, a villain character in the film Duniyadari (2013). In 2016, he co-starred in the critically acclaimed dramedy Ventilator, which was produced by Priyanka Chopra. His performance in the film was widely praised. In 2018, he starred in the Netflix Original Series Sacred Games alongside Saif Ali Khan where he played the role of constable Katekar. 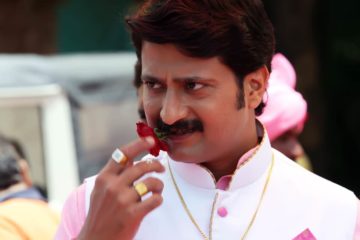