K. S. Harisankar is an Indian playback singer who works in Malayalam cinema. He made his debut at the age of five, along with K. J. Yesudas, in the film Saaphalyam.

He sang Payye Payye from Ormayundo Ee Mukham and Vidyasagar compositions – Nilaavum Maayunnu from Ennum Eppozhum and Vaanam Chaayum from Anarkali. The song Jeevamshamayi from Theevandi and the song ‘Pavizha Mazha’ from the movie Athiran also, gave him a huge breakthrough in his career. His upcoming project is Bodhi, Mukthi, Gathi, featuring three actresses, an independent project by Pragathi band.

Harisankar was born on 18 November 1993, in Haripad, Alappuzha district, Kerala as the elder son of Dr. Alleppey Sreekumar who worked as Principal of Swathi Thirunal College of Music, Trivandrum and Veena Vidooshi exponent Kamala Lakshmi. He is the grandson of M. P. Gopalan Nair who worked as Chief Engineer in All India Radio & singer Dr. K. Omanakutty. He is the great-nephew of singer and music director late M. G. Radhakrishnan and playback singer M. G. Sreekumar and grew up under their tutelage .

Harisankar is a trained classical singer under his father Alleppey Sreekumar and Dr. K Omanakutty. He has won several awards and has appeared as a carnatic vocalist at Madras Music Academy and several other venues in Kerala. He also is part of an independent fusion music band – Pragathi . He married Dr. Gadha Sidharthan on 21 May 2017 . His younger brother, K. S. Ravisankar, is a violinist. 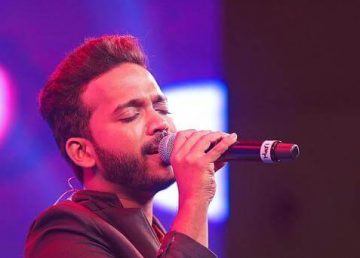