Deepika Padukone (pronounced [d̪iːpɪkaː pəɖʊkoːɳeː] or [paːɖʊkoːɳ]; born 5 January 1986) is an Indian film actress and producer. One of the highest-paid actresses in India, her accolades include three Filmfare Awards. She features in listings of the nation’s most popular personalities, and Time named her one of the 100 most influential people in the world in 2018.

Padukone, the daughter of the badminton player Prakash Padukone, was born in Copenhagen and raised in Bangalore. As a teenager, she played badminton in national level championships but left her career in the sport to become a fashion model. She soon received offers for film roles and made her acting debut in 2006 as the title character of the Kannada film Aishwarya. Padukone then played a dual role opposite Shah Rukh Khan in her first Bollywood release, the romance Om Shanti Om (2007), which won her the Filmfare Award for Best Female Debut. Padukone received praise for her starring role in the romance Love Aaj Kal (2009), but this was followed by a brief setback. The romantic comedy Cocktail (2012) marked a turning point in her career, and she gained further success with starring roles in the romantic comedies Yeh Jawaani Hai Deewani and Chennai Express (both 2013), the heist comedy Happy New Year (2014), and Sanjay Leela Bhansali’s period dramas Bajirao Mastani (2015) and Padmaavat (2018). Padukone’s acclaimed portrayal of a character based on Juliet in Bhansali’s tragic romance Goliyon Ki Raasleela Ram-Leela (2013) and a headstrong architect in the comedy-drama Piku (2015) earned her two Filmfare Awards for Best Actress. Her first project in Hollywood came with the action film XXX: Return of Xander Cage (2017).

Padukone formed her own production company KA Entertainment in 2019. She is the chairperson of the Mumbai Academy of the Moving Image and is the founder of the Live Love Laugh Foundation, which creates awareness on mental health in India. Vocal about issues such as feminism and depression, she also participates in stage shows, has written columns for a newspaper, designed her own line of clothing for women, and is a prominent celebrity endorser for brands and products. Padukone is married to her frequent co-star Ranveer Singh.

Padukone was born on 5 January 1986 in Copenhagen, Denmark to Konkani-speaking parents. Her father, Prakash Padukone, is a former professional badminton player and her mother, Ujjala, is a travel agent. Her younger sister, Anisha, is a golfer. Her paternal grandfather, Ramesh, was a secretary of the Mysore Badminton Association. The family relocated to Bangalore, India when Padukone was a year old. She was educated at Bangalore’s Sophia High School and completed her pre-university education at Mount Carmel College She subsequently enrolled at the Indira Gandhi National Open University for a Bachelor of Arts degree in sociology but later quit it due to scheduling conflicts with her modelling career.

Deepika Padukone is posing with her father, mother, and sister
Padukone with her parents and sister at the 59th Filmfare Awards in 2014
Padukone has said that she was socially awkward as a child and did not have many friends. The focus of her life was badminton, which she played competitively from a young age. Describing her daily routine in a 2012 interview, Padukone said, “I would wake up at five in the morning, go for physical training, go to school, again go for playing badminton, finish my homework, and go to sleep.” Padukone continued to pursue a career in badminton throughout her school years and played the sport in national level championships. She also played baseball in a few state level tournaments. While concentrating on her education and sporting career, Padukone also worked as a child model, first appearing in a couple of advertising campaigns at the age of eight. In the tenth grade, she changed focus and decided to become a fashion model. She later explained, “I realised that I was playing the game only because it ran in the family. So, I asked my father if I could give up the game and he wasn’t upset at all.” In 2004, she began a full-time career as a model under the tutelage of Prasad Bidapa.

Early in her career, Padukone gained recognition with a television commercial for the soap Liril and modelled for various other brands and products. In 2005, she made her runway debut at the Lakme Fashion Week for designer Suneet Varma and won the “Model of the Year” award at the Kingfisher Fashion Awards. Padukone’s fame increased when she appeared in a highly popular print campaign for the 2006 Kingfisher Calendar; the designer Wendell Rodricks commented, “Since Aishwarya Rai, we haven’t had a girl as beautiful and fresh.” Rodricks had spotted her at a Ganjam jewellery class he was teaching and signed her up with the Matrix agency. At the age of 21, Padukone relocated to Mumbai and stayed at her aunt’s home. That year, she gained wider recognition by featuring in the music video for Himesh Reshammiya’s song “Naam Hai Tera”.

Padukone soon began to receive offers for film roles. Believing herself to be too inexperienced as an actor, she instead enrolled for a course at Anupam Kher’s film academy. Following much media speculation, the director Farah Khan, who had noticed her in Reshammiya’s music video, made the decision to cast her for a role in Happy New Year. Fashion designer Wendell Rodricks also takes credit in helping her get the role. Farah Khan was looking for a model to star in her next film, and got in touch with Malaika Arora. Rodricks, for whom Padukone had been modelling for roughly two years then, recommended her to Arora, a close friend of his, who in turn recommended her to Khan in 2007. 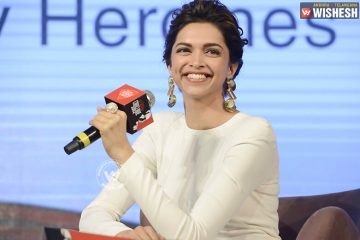