Bohemia was born on 15-10-1979 in Karachi in the state of Sind, Pakistan. He is a Pakistani-American Rapper, Music Director, Poet, Musician, Songwriter, Music Producer, Record Producer.

Bohemia is known as the worldwide creator of Punjabi rap. His actual name is Roger David. After spending his initial years in Pakistan, he relocated to California. He began his singing career as a Desi teenager in California delivering a kind of music which they never heard before and thus became an instant hit among the audiences.

He soon released his debut album titled ‘Vich Pardesan De’ which became an instant hit. He then released a full-lengthPunjabi album titled ‘Pesa Nasha Pyar’. After this album, he signed a multi-record deal with giant label Universal Music in 2006. He was instrumental in bringing Punjabi rap to a global platform. He soon became a new generation superstar of ‘Desi-rap’ and ‘Desi-Hip-Hop’. His increasing popularity brought him to Bollywood and he sang the title song of Akshay Kumar starrer film ‘Chandni Chowk to China’. He then lends his voice to the super hit song ‘Subah Hone Na De’ from Desi Boyz and also the entry theme of Sanjay Dutt’s role in the film. He went on world tours and performed live in Europe, Asia, and America. In 2009, he became the best-selling artist of the year. He was invited by Coke Studio Pakistan and became the first rapper to be invited on this legendary music platform.

He recently released his 5th album titled ‘Skull & Bones – The Final Chapter’ which was completely recorded, composed and written by him. The album hit the number one spot on the i-tunes chart. This albums track ‘Bijlee’ and ‘Zamana Jali’ became very popular. He recently started ‘Skull and Bones’ Tour in 2017 which started off from Canada and then he traveled to Middle-East, Australia, and New Zealand and finally concluded the tour in Las Vegas. 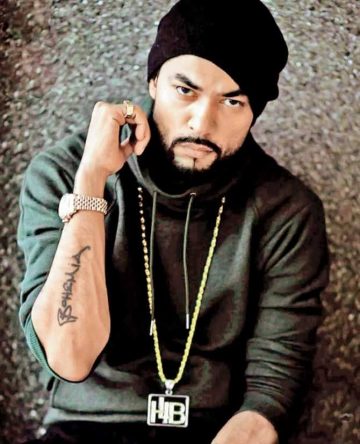