Actor-singer Gippy Grewal is in news for his latest album The Main Man. Ahead of the full album’s release, a new chartbuster was unveiled. The complete music album was launched a few hours ago.

After much anticipation, Punjabi singer and actor Gippy Grewal’s latest album The Main Man has been released. The singer had announced album’s release date, which coincides with his son Shinda’s birthday, earlier. The album features collaborations with rappers Bohemia and Karan Aujla and singers Amrit Maan and Jass Manak. The crooner took to Twitter on Tuesday to spread the word.

Gippy shared a post on Instagram informing his followers about the song’s release. “Lao Ji #AskThem Ho Gaya Release Daso Kiven Laga Gana ?Full Song Link In Bio Watch & Share (sic),” he wrote in the caption.
The Punjabi number is already popular among fans and has got many hooked. The video and the music are high on powerful beats and have an intriguing vibe in the backdrop. Gippy’s style has got his audience impressed.

Earlier, the music video of another song from The Main Man album titled ‘Ayen Kiven’, in collaboration with Amrit Maan, was released. This too was quite well received by Gippy’s many fans and followers.

The full album The Main Man has a duet song Sharaab crooned by Gippy and Gurlez Akhtar. Another duet with Shipra Goyal is called Tera Ala Jatt, Naam Jaat Da features Jass Manak and 2 seater is in collaboration with Afsana Khan.

Gippy Grewal is popular Punjabi singer who has delivered many hits. He has also had considerable success in Punjabi movies. He made his Bollywood debut with the film Lucknow Central. He will soon be seen in the upcoming film Warning. He also has a part to play in another film called Carry on Jatta 3. 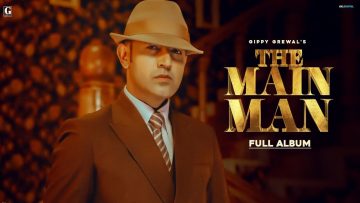