Thappad (transl. Slap) is an upcoming 2020 Indian Hindi-language drama film directed and co-produced (with Bhushan Kumar) by Anubhav Sinha. The film stars Taapsee Pannu as a woman who files for divorce when her husband slaps her It will be theatrically released on 28 February 2020.

Production:
The film marks the second collaboration of Taapsee Pannu and director Anubhav Sinha after the 2018 film Mulk.

Principal photography began on 6 September 2019 and ended on 16 October. The film was shot in various places of Uttar Pradesh.

Promotion and release:
The film was initially planned for release on 6 March 2020, but later it was preponed by a week earlier i.e. to release on 28 February.

On 31 January official trailer of the film was launched by T-Series. 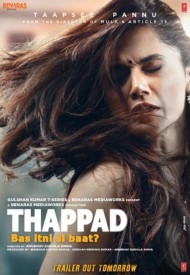