Shikara – The Untold Story of Kashmiri Pandits is an upcoming Indian Hindi language historical drama, romantic feature film produced and directed by Vidhu Vinod Chopra under his own banner, Vinod Chopra Films.The film is based on the Kashmiri pandit exodus from Kashmir.The film is set to release on 7 February 2020.

In March 2018, it was reported that a film was shot under the title “Love and Letters” in Kashmir by Vidhu Vinod Chopra. In an interview later, he mentioned that almost entirely film was shot in Kashmir. Initially in Summer, then in autumn and again in Winter. Only refugee camps were recreated in Mumbai and some sequences in Agra, but this part of story is brief. Shots in Kashmir included several places such as the Lalit Hotel in Srinagar, on shikaras in the middle of a lake, on the backwaters of the Dal, in a desolate Pandit house, near Hazratbal and many more.

Lead characters of Kashmiri birth, Aadil Khan and Sadia were cast to lend authenticity. Several Kashmiri Pandits were selected for principal cast. Also, to make refugee camps as similar as possible to the real ones 30 years ago (19 January 1990), actual refugees of Kashmir pandit Exodus were cast. Approximately 4,000 out of 400,000 refugees, who are currently inhabitants of Jagti and other refugee camps agreed to take part. They were women, children and older people. Refugee camp scenes were shot for several days and nights.

Some scenes were reported to be shot in Wandhama near Ganderbal, where one of the biggest tragedies in the Valley, 23 Kashmiri Pandits — four children, nine women and ten men were massacred in 1998.

On 7 January 2020 official trailer of the film was launched by Fox Star Studios. A. R. Rahman played the theme of Shikara live in the launch event. On 14 January 2020 A ‘behind the scenes’ video released shows 4000 refugee coming together after 30 years to take part in the production of refugee camp scenes. Names of few refugees, home town before fleeing and their experiences are shown in video. 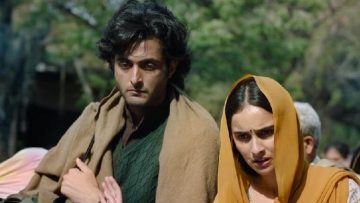