Sadak 2 is an upcoming Indian film directed by Mahesh Bhatt and produced by Mukesh Bhatt under their banner Vishesh Films. The film is the sequel to the 1991 film Sadak. The sequel stars Sanjay Dutt, Pooja Bhatt, Alia Bhatt and Aditya Roy Kapur. The film marks Mahesh Bhatt’s return as a director after 20 years.

The film is about Ravi’s depression and how he helps a young woman’s encounter with a godman, who is out to expose this fake guru running an ashram. The shooting began on 18 May 2019, and the film was shot in Ooty, Mumbai, Mysore and Uttarakhand. The film will premiere on 28 August 2020 on Disney+ Hotstar.

The film was initially scheduled for release on 25 March 2020, but was pushed to 10 July 2020. It was again pulled from the release schedule as the shooting was delayed because of COVID-19 pandemic lockdown in India.

On 29 June 2020, the streaming service Disney+ Hotstar conducted a virtual press conference, where Alia Bhatt announced that the film would be released on Disney+ Hotstar exclusively, premiering on 28 August 2020.

The film’s trailer was released on 12 August 2020 on YouTube and within a day had received 1.8 million dislikes due to vote brigading. 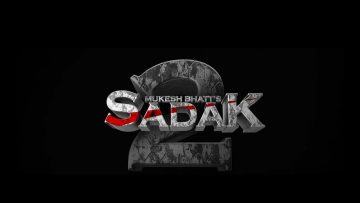