Shubh Mangal Zyada Saavdhan (transl. Extra careful of marriage) is an upcoming Indian Hindi-language romantic comedy drama film. The film, themed on homosexuality, is a second installment in the series which the 2017 film Shubh Mangal Saavdhan started. Starring Ayushmann Khurrana and Jitendra Kumar, it is written and directed by Hitesh Kewalya and produced by Aanand L. Rai and Bhushan Kumar under their respective banners Colour Yellow Productions and T-Series. The filming began on 10 September 2019 and ended on 16 December 2019 in Varanasi; it is scheduled to be released on 21 February 2020.

On 20 January 2020 official trailer of the film was launched by T-Series.
The film is scheduled to be release on 21 February 2020.

The film’s songs are composed and written by Tanishk Bagchi and Vayu.

The song “Yaar Bina Chain Kahan Re” from the film Saaheb, was originally composed by Bappi Lahiri, lyrics by Anjaan and sung by Bappi Lahiri and S. Janaki then was recreated by Tanishk Bagchi.

The song “Gabru” was originally composed by Yo Yo Honey Singh. The song was released in 2013. The New song is sung by Romy & music is recreated by Tanishk Bagchi. 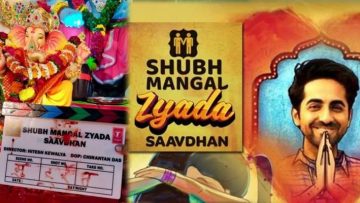