Radhe Shyam is an upcoming Indian romantic drama film written and directed by Radha Krishna Kumar with Prabhas and Pooja Hegde in the lead roles.

Shot simultaneously in Telugu and Hindi, the film is presented by Krishnam Raju under Gopi Krishna Movies in Telugu with Bhushan Kumar under T-Series in Hindi and produced by UV Creations.

Prabhas is all set to impress his fans with his next Radhe Shyam. A few days back, the director of the film Radha Krishna Kumar has announced that the film shoot will resume in the second week of September. ‘All excited to resume the shoot from 2nd week of September, the longest and the loveliest schedule with our darling prabhas and hegdepooja , UVKrishnamRaju its BhushanKumar RadheShyam . The film also stars Pooja Hegde, Priyadarshi, Bhagyashree in pivotal roles.

While Manoj Paramahamsa will be handling the camera, Kamalkannan will be supervising the VFX team. The music director of the film is yet to be finalised. Radhe Shyam is slated for release in Telugu, Tamil, Hindi and Malayalam in summer 2021. 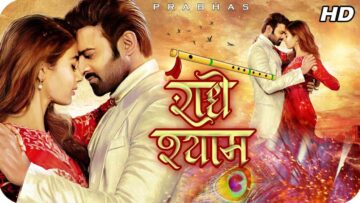