Prem Rog : (Love Sickness) is a 1982 Bollywood romantic film directed by Raj Kapoor. The film tells the story of a man’s love towards a woman who is a widow and of a higher status. The film is considered a classic work by the director Raj Kapoor. Raj Kapoor returned to social themes with this film. The film earned high critical acclaim. The screenplay was written by Jainendra Jain and Kamna Chandra. 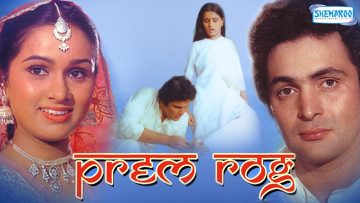