Panga is inspired from the life of a national level Kabbadi player from India. It follows her triumphs, struggle and overcoming of stereotypes and reflecting upon the importance of love and family support in order to become successful.

Synopsis
Rooted in the subculture of societal facts Panga is an emotional roller coaster tale of a middle-class Indian woman; A forgotten kabaddi world champion who catalyzes an inner desire to give a new meaning to her existing role as a wife and mother and takes an ingenious decision to come back to the sport despite the challenges of age stereotypes and a new generation complexities which creates an upheaval in her life as she is torn between family responsibility and love for the sport.

Production
Development
Story of Panga was conceived from the life of a national level Kabbadi player in July 2018. It follows her triumphs, struggle and overcoming of stereotypes. It shows that the support of family is important and stresses that your kin standing behind you, no one in the world can take ‘panga’ with you (mess with you). In an interview Tiwari told that she wanted to keep evolving with stories that talk about relationships in a new-age Indian family. She further told that Fox Star Studios was exactly in the same space of storytelling and she was filled with gratitude to work with them.

Panga was announced on 21 August 2018 with Ashwiny Iyer Tiwari sharing an emotional Instagram video montage of herself, Kangana Ranaut, Jassi Gill, Neena Gupta and their families, indicating that when your kin stands behind you, no one in the world can take ‘panga’ with you. Ranaut told Mumbai Mirror in an interview: “When Ashwiny narrated the film’s story, I was completely moved. My family has been my pillar of strength and have always stood by me through thick and thin. I could really relate to the emotions of the film. Plus, Ashwiny is known for her slice-of-life films and I loved her recent work in Bareilly Ki Barfi. Panga is even more special for me as, for the first time, I will be playing the role of a National-level Kabaddi player. That’s going to be challenging for sure! I am looking forward to some exciting times with Ashwiny and the Fox Star team.”

Gill who is playing role of husband of Ranaut in the film told Mumbai Mirror: “I loved the script, especially the inspiring family angle. The film is a roller-coaster of emotions but to me the real Indian family feeling was the most heart-warming part of the subject. Since I come from a very close-knit family, I could identify with the story.”

Training
The actors appearing in the film as kabbadi players including Ranaut underwent training in kabaddi for over two months.[9]

Marketing and release
First look of the film was shared by the director of the film Ashwiny Iyer Tiwari on 7 March 2019, a still photo in which leading pair is laughing while looking at the sunset.

The first look poster of Ranaut was released on 19 December 2019.

On December 23 official trailer of the film was launched by Fox Star Studios. 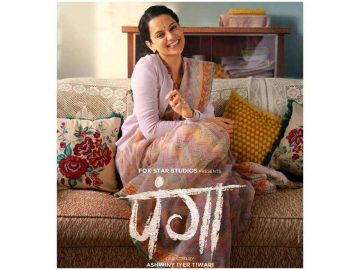