Written And Directed by Raghava Lawrence in his Hindi directorial debut. It is a remake of the 2011 Tamil film Muni 2: Kanchana and stars Akshay Kumar and Kiara Advani.

Akshay Kumar bit off a little more than he could chew this time around. He made a film called Laxmmi Bomb produced by a Kashmiri woman where he plays a transperson who is a ghost who has a trishul in its hand and goes by the pseudonym Asif. This is a gold mine for the outrage brigade. They simply didn’t know what to outrage over and whatnot, so they outraged over everything from his 20-year-old bare-chested hair-chested photoshoots to ads that even Akshay wouldn’t want to be reminded of.

The makers of Laxmmi Bomb, starring Kiara Advani and Akshay Kumar, unveiled the trailer of the film. Akshay makes his transformation into a transgender both fearful and funny.

As the trailer opens, Akshay and Kiara visit her parents home. Her mother is particularly afraid of shadows and Akshay does his best to rid her of the fear. His equation with his father-in-law is, at best, uncomfortable. Matters start go out of hand when Akshay’s behaviour slowly begins to change and he acquires a feminine trait. His character doesn’t believe in ghosts and at the very onset he had declared that ‘jis dinn mere saamne bhoot aya nah, main chudiyan pehen lunga’. 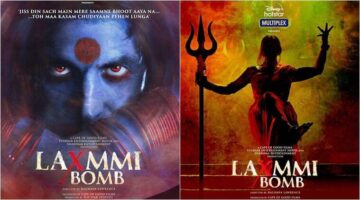