Lagnachi Wife Weddingchi Bayko is a Marathi television series. Madan, a small-town boy, works a chauffeur in London and falls in love with Maria, but her rich father disapproves their relationship. Blinded in love, Maria decides to elope and come to India where a surprise awaits her in the form of Kajol, Madan’s wedded wife. Enjoy this romantic comedy about the clash between two women and cultures.

But there is a twist in a plot as Madan is already married in India with town girl Kajol(played by actress Rupali Zankar). Even after Maria got to know that Madan is already married, she is anyway ready to settle with him in India with his family. So she accompanied with Madan while traveling to India. Kajol had had time to accept her as she cannot understand the language. 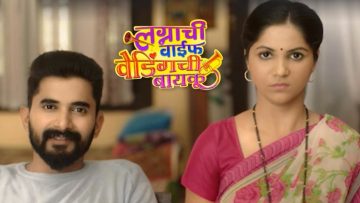