Kesari depicts the events leading to the Battle of Saragarhi, a battle between the British Indian Army and Pashtun tribesmen. During the battle that was fought in the region that today lies in the northern part of Pakistan and Afghanistan, 21 soldiers of the 36th Sikhs of the British Indian Army held off 6,000–10,000[a] Afridi and Orakzai tribesmen in a heroic last stand. 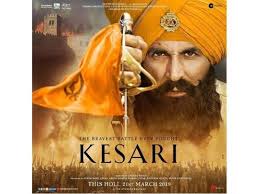