Jawaani Jaaneman is an upcoming 2020 Indian Hindi-language comedy film directed by Nitin Kakkar, starring Saif Ali Khan as a 40 year-old father and debutant Alaya Furniturewala as his daughter, alongside Tabu. Principal photography of the film took place from 14 June to 24 August 2019 in London, England. The film is set to release on 31 January 2020.

Saif Ali Khan started a new production house in October 2018 to co-produce Jawaani Jaaneman with Jay Shewakramani. Saif wanted the avant-garde project in an alternative genre. In a statement, he said, “this is going to be as exciting as it gets. Jay and I have been planning this for a while now and with Jawaani Jaaneman, we found just the right project to produce together.” Alaya Furniturewala daughter of Pooja Bedi, making her debut is playing the role of his daughter.Tabu has been cast in an interesting role. Khan lost weight to fit into the character of a forty year old father.

The filming began in the second week of June 2019 with principal photography in London. Alaya finished filming first schedule in August 2019. The film was eventually wrapped up on 24 August 2019.

On 9 January official trailer of the film was launched by Pooja Entertainment.

A remix of actor Saif Ali Khan’s classic song, Ole Ole, titled Ole Ole 2.0, has been released. The song is a part of the Jawaani Jaaneman soundtrack. Saif stars in the film opposite newcomer Alaya F.

The one-and-a-half minute video features Saif’s character in full playboy mode. It opens with him in bed with a blonde woman, and includes shots of him spraying deodorant on his nether regions and hitting on strangers in clubs. To remind audiences that the song is aimed at youngsters, and that Saif’s character is himself a man-child, the hook step includes the dab.

The song has been composed by Tanishk Bagchi, with lyrics by Shabbir Ahmed and vocals by Amit Mishra. The original song, which was featuring in the 1994 film Yeh Dillagi, was performed by Abhijeet Bhattacharya. In a statement, Bagchi had said, “It’s a fresh new version, but have kept the feel and vibe as the original. Shabbir Ahmed (lyricist) and I have worked on quite a few songs. This one also written by him keeps the fun element of the song alive as the original.”

Saif said about the film: “This film is about acceptance, accepting your age, your responsibilities. I think most people who are like that would react like this.” Jawaani Jaaneman was shot over the summer in London, and is about a character who loves partying, being forced to make adult decisions when a daughter he never knew he had walks up to him, and tells him that she’s pregnant. 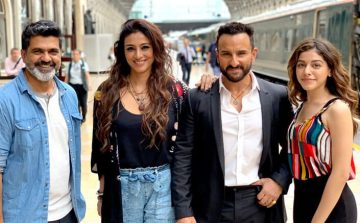