IPL 2020: A section of fans have hit out at Royal Challengers Bangalore for not using more of Kannada in their new theme song, which was unveiled on Friday.

oyal Challengers Bangalore (RCB) enjoy one of the most loyal fanbases in sport, let alone the Indian Premier League (IPL). Over the years, fans have thronged to the M Chinnaswamy Stadium, painting the iconic stadium red, regardless of the team’s performances.

As it turns out, a section of fans are not happy with RCB over their new theme song, which is predominantly in Hindi and English. The fans argue that there should have been more Kannada, considering the team is based out of Bengaluru.

RCB unveiled their new theme song for IPL 2020 on Friday, a day ahead of the season opener between Mumbai Indians and Chennai Super Kings. IPL 2020 will be played in the UAE this year in front of empty stands from September 19 to November 10.

“The Official RCB Anthem is here! And it’s dedicated to the best fans in the world. Time to crank up the volume to the maximum, 12th Man Army,” RCB said while unveiling their new theme song.

Here is how a section of fans reacted to the new theme song of the Virat Kohli-led side. Former India pacer Dodda Ganesh pointed out that there could have more usage of Kannada in the anthem.

The RCB squad is breaking sweat in the training sessions ahead of their tournament opener against Sunrisers Hyderabad on September 21. The side’s official social media accounts posted a number of videos from training sessions, as well as the highlights from their intra-squad match between Team Kohli and Team Chahal.

With pitches backed to assist spin in the UAE, Yuzvendra Chahal is expected to lead the spin attack for the side, while captain Virat Kohli and AB de Villiers remain the backbone of RCB’s batting lineup.

The 2020 edition of the Indian Premier League begins on September 19 when previous year’s finalists, Mumbai Indians and Chennai Super Kings play in Abu Dhabi. Th tournament will take place in three cities across the UAE: Abu Dhabi, Dubai and Sharjah. 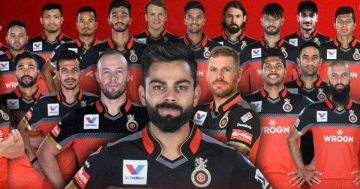