The Chennai Super Kings are a franchise cricket team based in Chennai, Tamil Nadu, which plays in the Indian Premier League. Founded in 2008, the team plays its home matches at the M. A. Chidambaram Stadium in Chennai. The team served a two-year suspension from the IPL starting July 2015 for the alleged involvement of their owners in the 2013 IPL betting case,and won the title in its comeback season. The team is captained by Mahendra Singh Dhoni and coached by Stephen Fleming.

The team’s theme song is the “Whistle Podu” designed by Aravind-Shankar. Although the track was created only for YouTube in 2008, it gained popularity during the 2009 season and later became the team’s theme song. The video of the song represents the street dance form of dappangutthu which is very popular among certain communities in Tamil Nadu. It is also a folk dance and music genre employed in Tamil cinema. The recordings of some of the Super Kings players whistling were used in the music video. 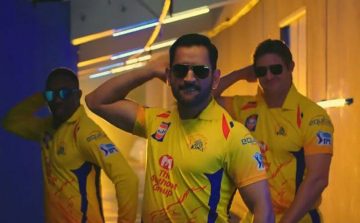