Hume Tumse Pyaar Kitna (English: How Much I Love You), is an upcoming romantic thriller film produced by Mahendra Bohra and Belvie Productions. The film is bankrolled by Jitendra Gulati and directed by Lalit Mohan, stars Karanvir Bohra, Priya Banerjee and Sameer Kochar. It is about limerence of Dhruv (played by Bohra) resulting from an obsessive attraction to Ananya (played by Banerjee). It is slated to release on 28 June 2019. 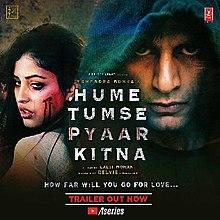