Garv: Pride & Honour is a story of three brave and honest cops: Samar Singh (Amrish Puri), Arjun Ranawat (Salman Khan), and Hyder Ali Khan (Arbaaz Khan). Samar wants to reduce the amount of crime in the state. The trio faces obstacles because the powerful and corrupt politicians (played by Govind Namdeo, Anant Jog, and Shivaji Satam) are connected with underworld don Zafar Supari (Mukesh Rishi). The politicians decide to transfer Samar Singh while Hyder Ali is named a traitor and is killed. The goons next target Arjun by gang-raping his sister, Rakhi (Akanksha) and hurting his other family members. Arjun, in a fit of anger, kills the rapists and surrenders himself to his police colleagues. He is seen walking up the steps with police in the opening scenes of the movie. He wants to be awarded capital punishment but later the court finds the politicians wrong and lets Arjun go free. 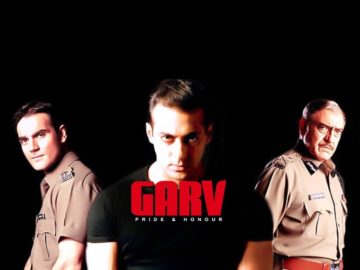