Deewana (English: Crazy) is a 1992 Indian Hindi-language action romantic movie directed by Raj Kanwar . Its his directorial debut and produced by Guddu
Newlywed Kajal is widowed when her husband, Ravi, is killed by his enemies. She moves to another city and gets married to Raja but her life takes a turn when Ravi returns from the dead.
Directed by Raj Kanwar. With Rishi Kapoor, Divya Bharti, Shah Rukh Khan, Alok Nath. A singer (Rishi Kapoor) marries his biggest fan, but his uncle 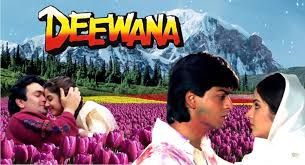