De De Pyaar De (transl. Give me love) is a 2019 Indian Hindi-language romantic comedy film written by Luv Ranjan and directed by Akiv Ali in his directorial debut. It was produced by Bhushan Kumar, Krishan Kumar, Luv Ranjan and Ankur Garg under their respective banners T-Series and Luv Films. It stars Ajay Devgn, Tabu and Rakul Preet Singh. The film follows Ashish, a middle-aged non-resident Indian divorcé; he decides to marry Ayesha, a young woman who is almost half his age. Chaos occurs when Ayesha is introduced to his family, including his ex-wife and children. 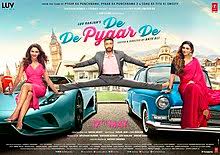