It is produced by Ajay Devgn, Luv Ranjan, Ankur Garg and presented by Bhushan Kumar. The film is set to release during Diwali 2020 on Amazon Prime Video.

Chhalaang is a hilarious, yet inspirational, journey of a PT Master from a semi government-funded school in Northern India. Montu is a typical PT Master for whom it`s just a job. When circumstances put everything that Montu cares for at stake, including Neelu who he loves, Montu is forced to do what he has never done – teach.
Through Montu`s journey, Chhalaang humorously addresses the value of Sports Education in the school curriculum. 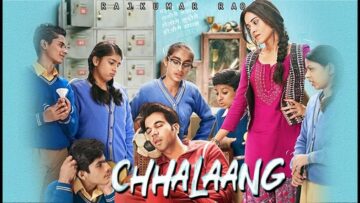