Bhuj: The Pride of India is an upcoming Indian period drama war directed by Abhishek Dudhaiya.

Principal photography commenced in June 2019, taking place near Hyderabad, Kutch, Bhopal, Indore, Lucknow, Mumbai, Kolkata Dubai and Goregaon. After production was put on hold in March 2020 due to Coronavirus lockdown in India when the film was 90% complete, Devgn resumed work in Hyderabad on 22 November 2020 and shooting finally wrapped up in the last week of March 2021 bringing the film into post-production stage.

Initially, the film was slated for theatrical release worldwide on 14 August 2020 during the Independence Day weekend, but the production halt affected it. And later, seeing the situation amid the pandemic and keeping in mind cinemas guidelines regarding occupancies, the makers announced that it will now stream directly on 13 August 2021 on Disney+Hotstar.

Set during the Indo-Pakistani War of 1971, it is about the life of IAF Squadron Leader Vijay Karnik, the then in-charge of the Bhuj airport who, with his team, reconstructed the IAF airbase with the help of 300 women from the local village Madhapar. The film features Ajay Devgn as Karnik, alongside Sanjay Dutt, Sonakshi Sinha, Nora Fatehi, Sharad Kelkar, Ammy Virk, Pranitha Subhash and Ihana Dhillon. 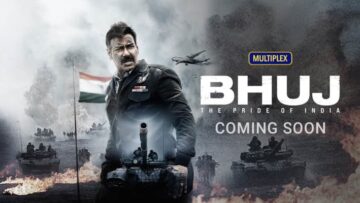