The new series on Amazon Prime pads up a wafer-thin story with inanities and songs, and is a terrible test of the viewer’s patience
The name of the show is fascinating—bandish is a musical term for a composition in Hindustani music, (it also means restriction in Urdu) and bandits always brings to mind swashbuckling acts of daredevilry. However, as the wise person said, one should not judge a book by its cover or a show by its name.

Despite the presence of stalwarts such as Naseeruddin Shah and Atul Kulkarni, Bandish Bandits, is a grating mountain of clichés. The 10-episode series marks the digital debut of composing trio, Shankar-Ehsan-Loy: the music is catchy but would not bring down rain. Bandish Bandits tells the story of the love between Tamanna, a popstar, and Radhe, a classical music prodigy in Jodhpur.

Radhe’s grandfather, Pandit Radhemohan Rathod, is a celebrated singer, a strict disciplinarian, and believes the purity of music should not be tainted by filthy lucre or light music. The house has to run however, and it falls on Radhe’s father, Rajendra, to find the money to keep the home fires burning. Naturally enough, Rajendra falls prey to evil, money-grubbing bankers and moneylenders. Also in the haveli is Rajendra’s brother, Devendra, who makes money on the side singing ad jingles for saris and laxatives. Radhe’s mum, Mohini, flashes her downcast eyes as she endlessly serves the menfolk meals in gigantic brass thalis.

Radhe dreams of winning his grandfather’s approval, while his father sends him off to work at the palace as a clerk or some such. At the other end of the universe in Mumbai, is Tamanna, a popstar. When her last song is trolled and the record company is planning to terminate her contract, she dashes off to Jodhpur in search of inspiration.

At a corporate show, she meets Radhe and decides he is the one to inspire her next super hit. Bandish Bandits feels like it is wallowing in the well of lost plots. Everything in the show has been done before and a million times better. There you can see Abhimaan (one of the episodes is even called A Star is Born!) and here you can see bits of Hum Dil De Chuke Sanam.

The writing is so lazy that you can only bite your arm in frustration. There is no sense of urgency as time stretches or compresses to suit the next crisis. You want to show a rebel, show Tamanna smoking and wearing very few clothes. After that introduction shot, she never seems to smoke. When and why did she quit? Then she drives to Jodhpur from Mumbai on a bike. What happened to the bike later?

If the characters are stereotypes, (Radhe is a classical singer, Tamanna is an internet sensation, Panditji is strict, one friend is a clown and the other shrieks) so is the setting. How many curly doors and latticed windows will it take before you can call it Rajasthan? How many swirling skirts, dreaming forts and stepped wells before they are forever slammed? How many clueless foreigners and gol gappa eating competitions before the viewer cries enough? And amazingly in the middle of all that there is a French girl railing against imperialism—go figure.

The language is annoying; no 20-something speaks the way they do in the show. All the four-letter words and sexual innuendo just sounds like what old people think “millennials” would say. Cast-wise, Naseeruddin Shah as Panditji does a less interesting iteration of his Gulfam Hassan (Sarfarosh). Atul Kulkarni as Digvijay is reduced to wiggling his eyebrows to reveal his dastardly plans of bringing down the Rathod Gharana. Shreya Chaudhary is pretty as Tamanna while Ritwik Bhowmik is earnest as Radhe — his shirts are excellent though. Sheeba Chaddha (Mohini) and Rajesh Tailang (Rajendra) do what they can with their sketchy parts. Kunaal Roy Kapur is stuck with annoying Arghya, the city dude who talks like no living person.

Bandish Bandits would have scraped through as a 90-minute vanilla rom-com. Padding up that wafer-thin story with inanities and songs is a terrible test of the viewer’s patience. And the season finale has set up for season 2. Shudder. 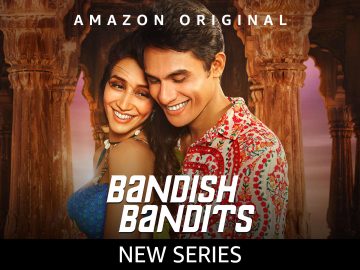