Baaghi 3 is an upcoming Indian action thriller film directed by Ahmed Khan. Produced by Nadiadwala Grandson Entertainment and Fox Star Studios, it is a spiritual sequel to Baaghi (2016) and Baaghi 2 (2018). Baaghi 3 stars Tiger Shroff, Riteish Deshmukh and Shraddha Kapoor. It is an official remake of 2012 Tamil film Vettai. Shraddha Kapoor is playing the role of an air hostess in the movie.

Principal photography of the film began on 12 September 2019 in Mumbai.It is scheduled to be theatrically released in cinemas on 6 March 2020. 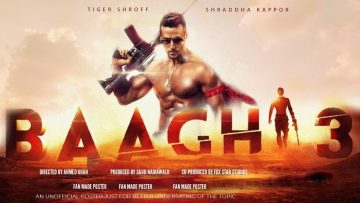